In 1992 Government passed a new Act, the Energy Companies Act that resulted in Waitaki Electric Power Board becoming a public company, registered under the Companies Act 1956. Initially the Company was known as Waitaki Power Limited.

20 of the 29 electricity distribution companies in New Zealand, and their associated trusts, were established in much the same way. A further four were established under territorial authority ownership, while Consumers serviced by the remaining five opted for some form of mixed ownership model.

However, of that number, only 12 of the Trusts involved, including Waitaki Power Trust, are deemed to be “consumer trusts” by the Commerce Act 1986.

Waitaki Power Trust is affiliated to Energy Trusts of New Zealand (ETNZ). Access to ETNZ, its annual conference and its advocacy function, ensures that Trustees are kept fully informed on national issues affecting the electricity supply market which enables Trustees as shareholders of Network Waitaki Limited to be much wiser about the legislative and regulatory environment under which Network Waitaki Limited is required to operate.

ETNZ also provides Trustees of energy trusts with a trustee manual relating primarily to the role and responsibilities of Trustees under the Trust Act 2019 and the Trust Deeds, information which is elaborated on at ETNZ conferences enabling Trustees to be well informed.

The general roles and responsibilities which are binding on Trustee/Shareholders of Network Waitaki Limited as a consumer trust owned business, are set out in the following legislation:

Binding shareholder responsibilities include, but not exclusively: 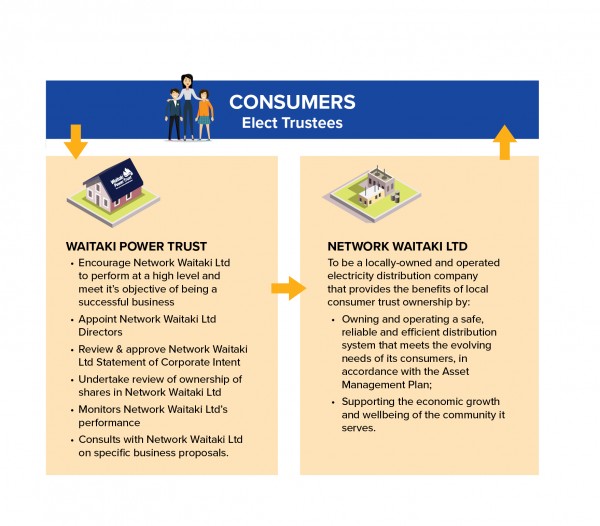 Binding Trustee responsibilities include, but not exclusively:

Click here to find out more about your Trustees.

The Commerce Amendment Act 2008 resulted in changes to the Commerce Commission’s monitoring of the performance of companies that have no natural competitors.

Parliament accepted that there was no need to regulate businesses which were 100% trust owned because from the information trustees were already getting they understood the businesses commercial and non-commercial practices, could see what profits were being earned and what benefits were being returned to the beneficiaries.

Under those circumstances, trustees were considered by Parliament to be the appropriate primary regulator for trust owned businesses.

The importance of the change cannot be overstated. From 2008 onwards every aspect of the performance of the other seventeen electricity distribution businesses in New Zealand, from service levels and annual expenditure to increases in annual profit and line charges, has continued to be monitored and effectively controlled by the Commerce Commission under a one size fits all approach to regulation unless special conditions are not only applied for, but also granted by the Commerce Commission.

The exemption from full control by the Commerce Commission was based on two contentions advocated by trustees of 100% trust owned electricity distribution line company businesses that were upheld by Parliament:

As a result of changes to the Commerce Commission’s regulatory monitoring of Network Waitaki’s financial performance along with performance relating to asset management, maintenance, levels of reliability, quality of service, efficiency, charges, tariff increases and annual profit, trustee oversight was widened from the comparison between the Company’s budget and work forecasts at the start of the year in the Statement of Corporate Intent and actual figures in Network Waitaki’s Annual Report.

Additional trustee responsibilities now include monitoring to check whether:

To make the necessary judgements, trustees must again be wise and well-informed. For trustees of 100% consumer trust owned electricity distribution businesses attendance at ETNZ conferences is now almost a necessity. (Refer to Policy on Trustee reimbursement of out of pocket expenses.)

While fulfilling “Information Disclosure” provisions requires the full-time attention of at least one NWL staff member, operational costs involved under the changed regulatory requirements are significantly less than prior to 2008 when costs associated with the Commerce Commission’s regulated monitoring applied to all 29 of New Zealand’s electricity distribution lines businesses.

However, the main gain for Network Waitaki and its consumers is that the exemption from regulatory control of business activity by the Commerce Commission has freed up internal and financial resources enabling new and necessary capital work to be done in order to service growth in consumer demand driven by irrigation development.

Both outcomes are in the best interests of Network Waitaki’s consumer/beneficiaries.

What makes up your power bill