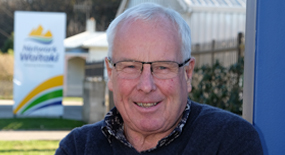 Although Jock (John) was born in Lawrence he has lived most of his life in North Otago. Following schooling in Oamaru, he studied at Lincoln College and gained a B Agri Sc. After working as a scientist for one year he returned to North Otago as a farm worker.

He subsequently entered into a partnership agreement with the Mitchells and farmed with Ross Mitchell for nearly 40 years. In 2015 Jock sold his share of the farming interests to his son Nick and Topflite Petfood interests to his other son Greg. His daughter Jane currently works in the USA.

Jock has always taken an interest in communities and amongst other interests has served on the local school board of trustees, Lincoln University council, was the inaugural chairman of the North Otago Irrigation Company and he is currently a director on two North Otago Irrigation companies, trustee on the Waitaki Power Trust as well as serving on three advisory boards.

Jock and his wife Helen now live in the house that was originally part of the farm owned by both of them.