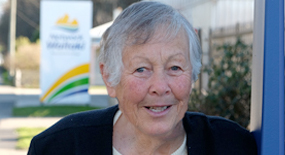 Helen grew up in Tapanui, a small rural town in West Otago where the top of the Blue Mountains to the Pomahaka River was her playground until she relocated to Dunedin aged 17.

Her work ethic, personality, attitude and values were shaped by her parents and experiences from a young age. Frequently quoted old Scottish sayings applied in various contexts such as ‘where there’s a will, there’s a way’, ‘if you don’t succeed at first, try, try, try, again’ and ‘cut your cloth according to your means’ can often be applied to Helen's strength and resilience.

Helen is married to Terry Fowler, an Oamaruvian by birth. Helen has two adult sons and two grandchildren. Terry and Helen have owned a lifestyle property in the lower Waitaki Valley for 26 years, where Helen continues to follow her lifelong passion for the outdoors and horticulture through her establishment of shelter, amenity and fruit trees, shrubs, roses, flowers and for reasons of self-sufficiency, vegetables, berry fruits and nut trees.

Key experiences that have been influential to Helen include:

Helen uses her advocacy skills on behalf of consumers at local and government/regulatory levels as and when required.